Does the west coast have better tacos than the east coast ?

I’ve had my fair share of okay tacos – okay, many bad tacos in NY – that just can’t compete with the ones I’ve had in LA.

What’s going on with you New York?

Or………. maybe I just haven’t discovered the super good ones?

In a way, tacos remind me of Taiwanese breakfast egg crepes or Chinese scallion pancakes (a thinner version) that wrap around roast beef and garlic chives.  Hmmm……Yum yum !!

Regardless the east or west coast, this time I’m taking the taco mission (no pun intended) into my own hands to prove that east coast people can make tacos too!

I love my tacos made with slow roasted pulled pork.  I think people call them carnitas tacos?

It just so happened that I ran out of time to do a pot roast this week and decided to do a quicker version of caramelized pork tenderloin tacos with paleo tortillas.

I wasn’t quite sure how they would turn out in the beginning but man, I’ve gotta tell you, these are some badass tacos !

These Paleo Taco Caramelized Pork are so good that I think they will become one of my family staples.

The paleo tortillas I learned from The Stupid Easy Paleo are super easy to make and they hold my tenderloin babies pretty well.  I think next time I’ll try a sweet tortilla version on another sunny day !

So now, should we have an east v.s. west coast taco contest? 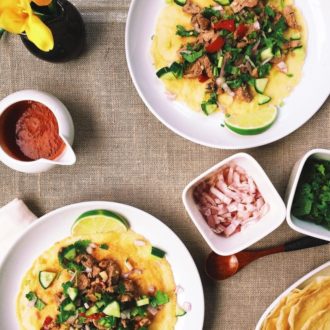 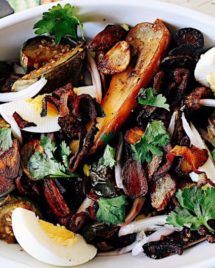